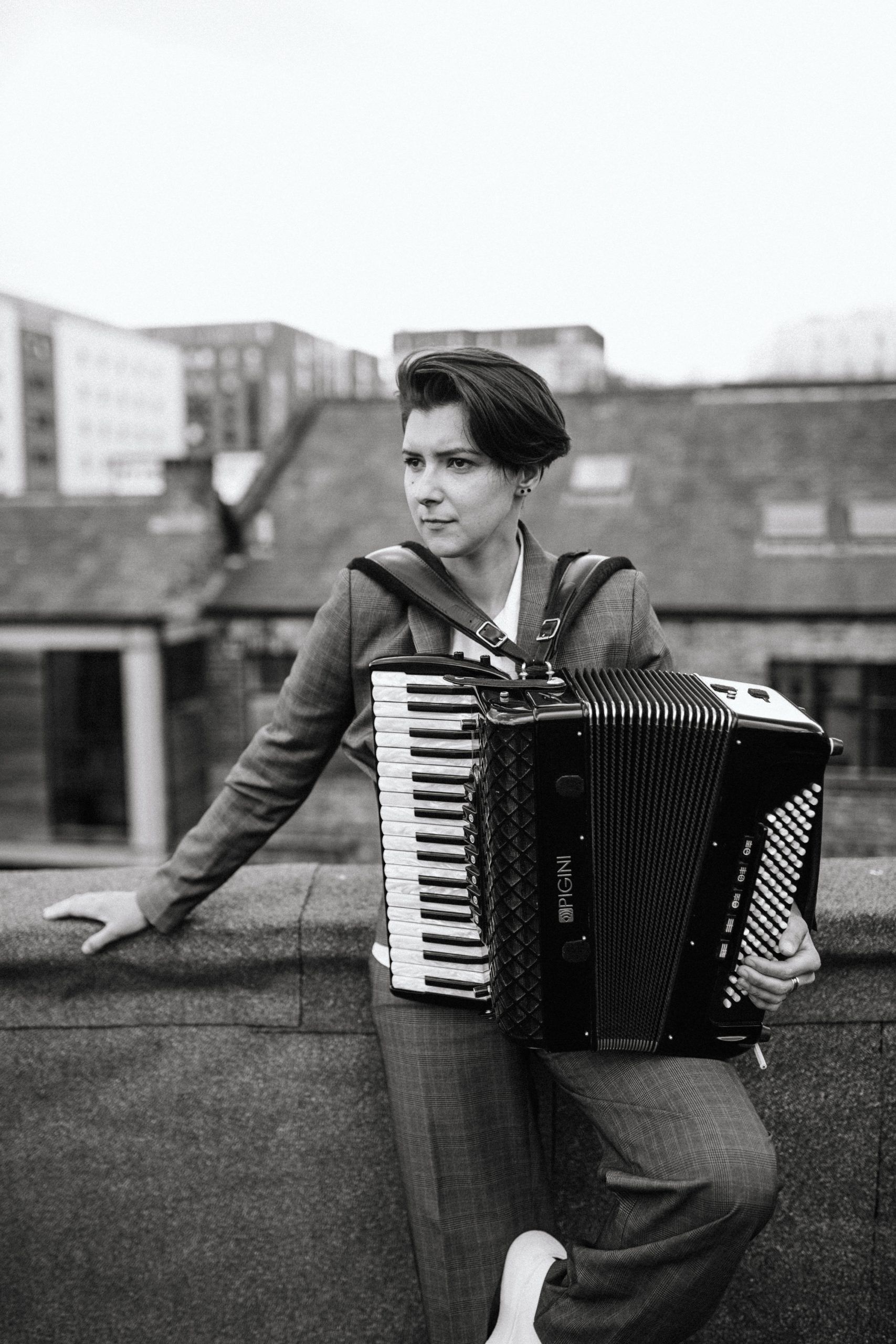 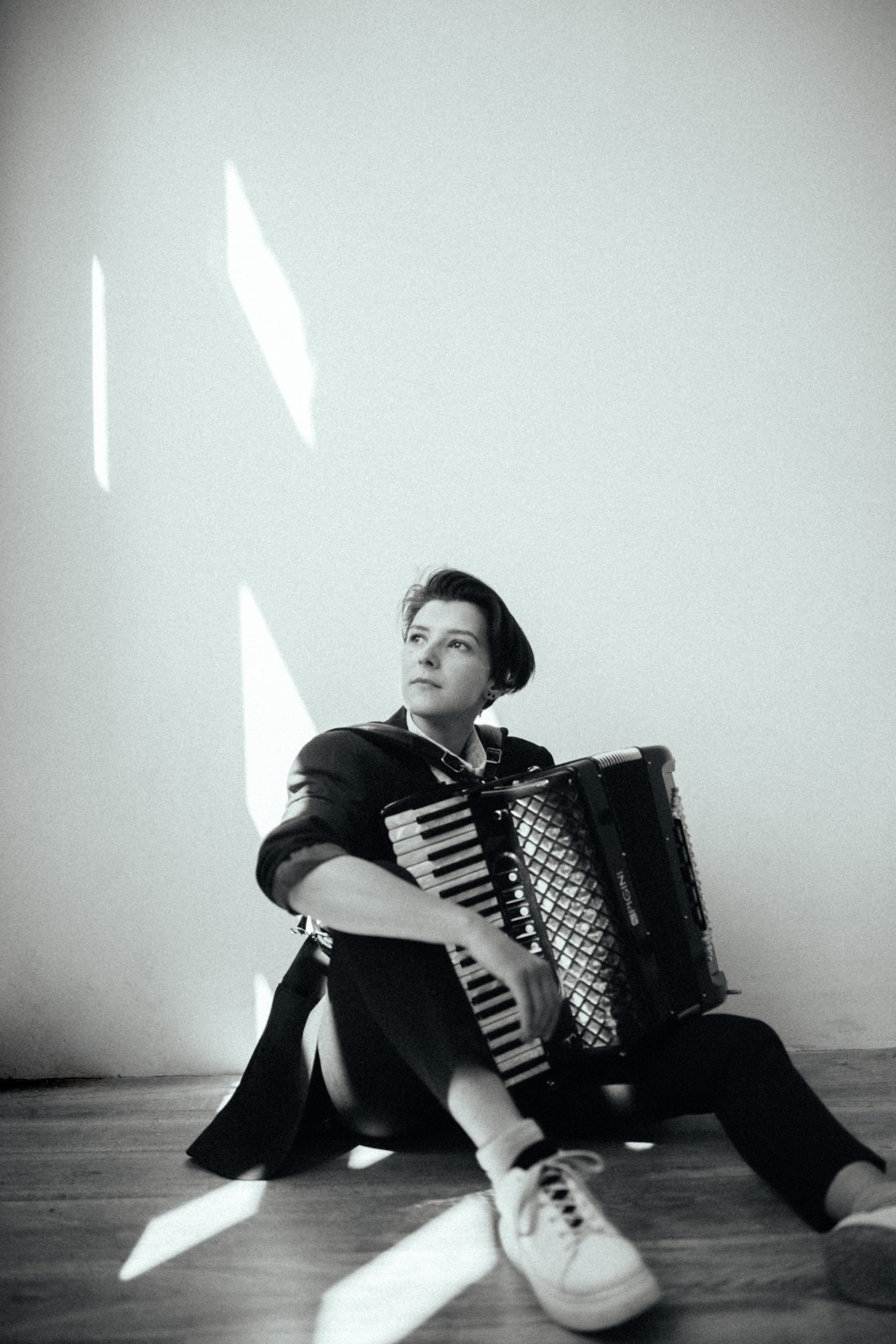 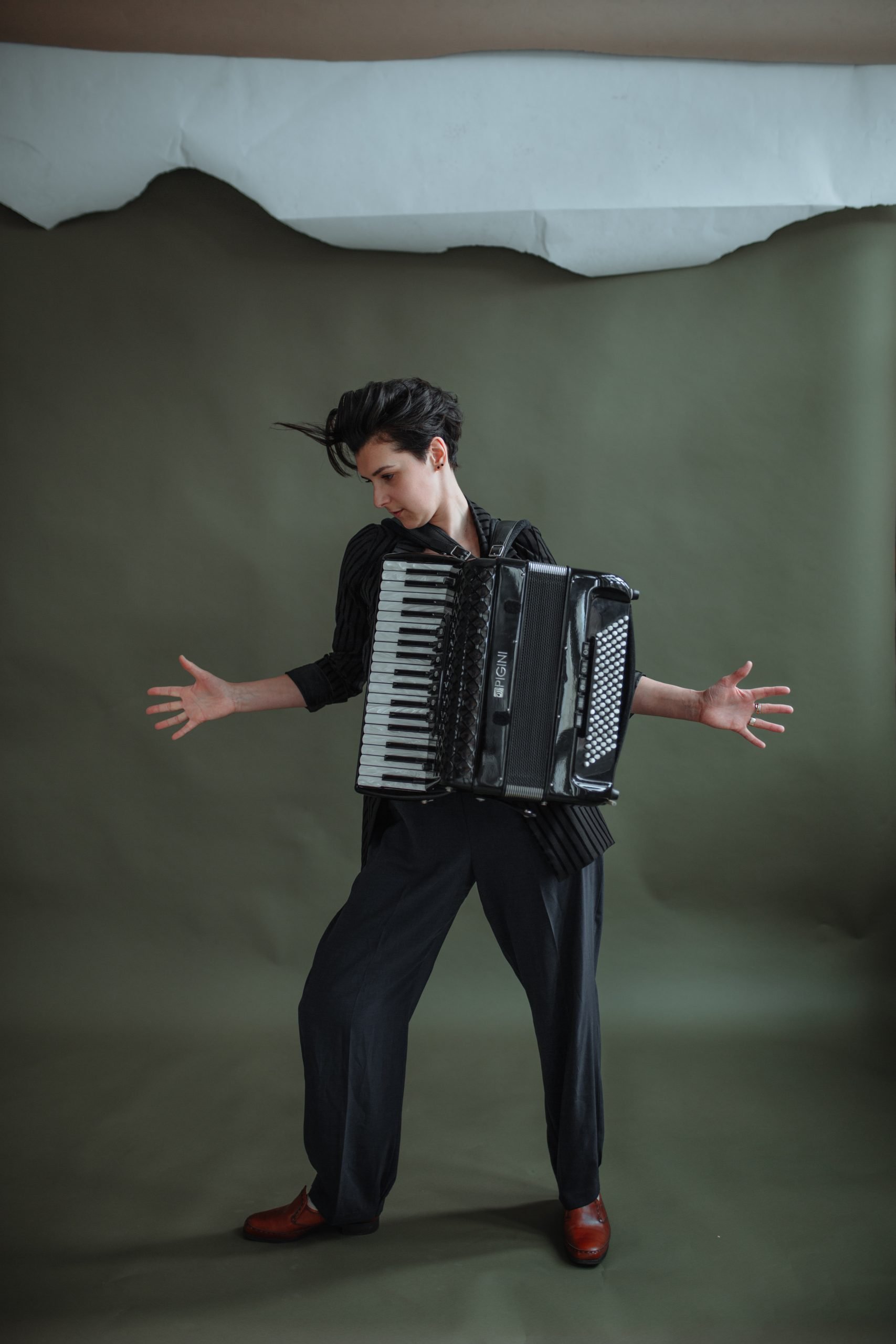 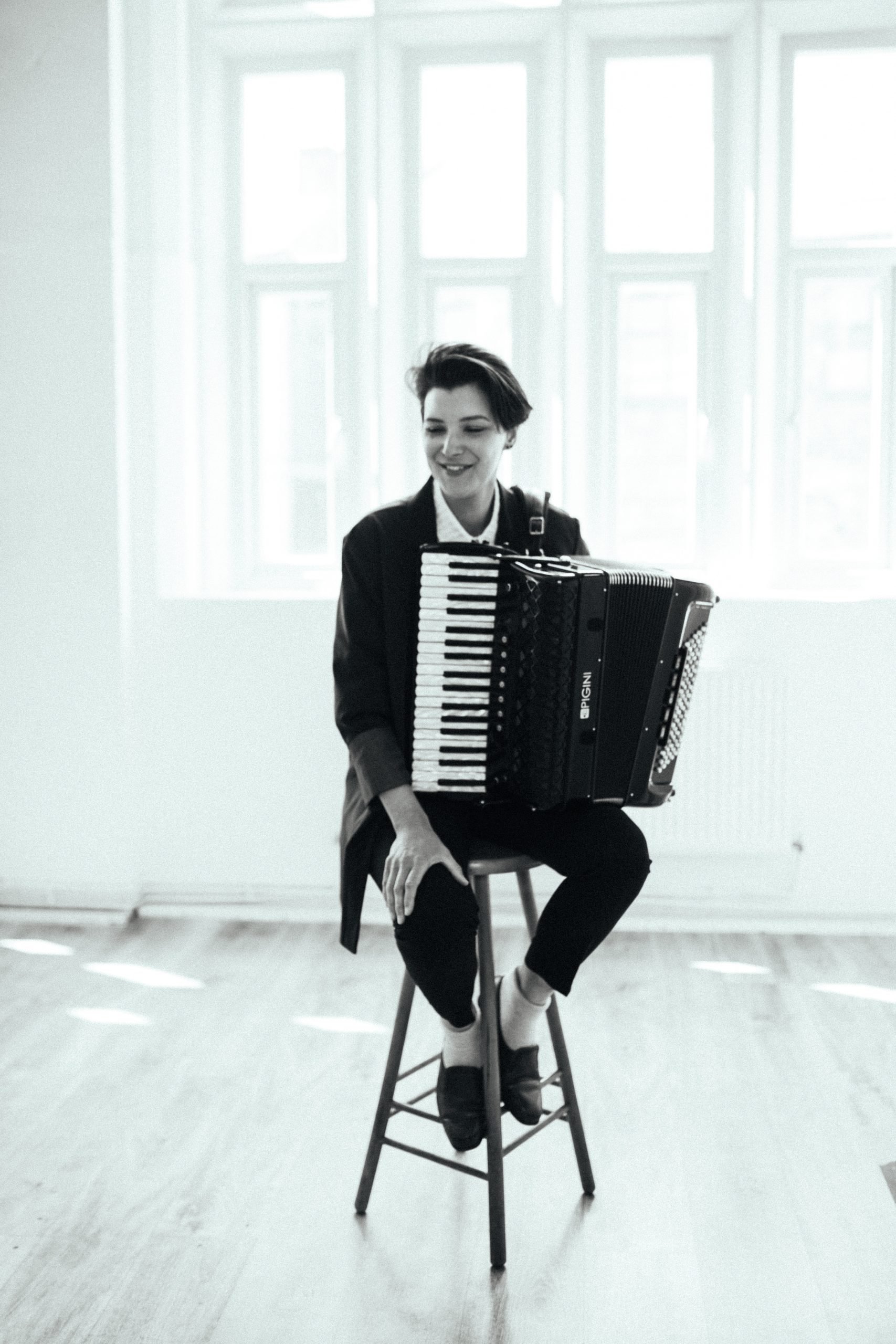 Amy Thatcher is a professional accordionist. She is based in the North East of England. Her reputation is that of one of the UK’s leading folk accordionists. Firstly as a performer. Secondly as a composer.
Amy is garnered from working with luminaries such as.
“[Amy has become] my right hand woman”. This is how Tickell describes their working relationship. Moreover, this has spanned over ten years.
Amy’s musical upbringing owes a lot to Stockport’s famous “Fosbrook’s Folk Education Trust”. She trained from the age of eight on.
Her education here concluded at age 18. But most importantly not before being taught by and recording with accordion virtuoso Murray Grainger.
That first now-infamous album, entitled “Paper Bird”, was recorded when she was just 16 years old.

From 18 onwards she continued her musical education in Newcastle. That is to say that this was on the prestigious Folk and Traditional Music degree course at Newcastle University.
Her exceptional accordion playing has taken her across the world. For example from The Royal Albert Hall to the Rainforest World Music Festival in Malaysia. In addition performing with small instrumental groups to full orchestras.
Furthermore Amy  has a diverse range of musical influences and experiences. These include contemporary avant-guard composer Terry Riley’s compositions. In addition it includes the hugely successful Leonard Cohen Tribute tour.

In 2009 Amy had the pleasure of collaborating with Sting. She performed on his Winter Song book and DVD. In addition she contributed to his musical Broadway show “The Last Ship”.

2019 saw the release of her debut album “Solo”. Solo is a dynamic and expressive instrumental album. Exploring new textures and arrangements for solo accordion.
Amy’s following EP ‘Let What’s In, Out’ was released in November 2021. This EP was released to raise awareness of Premature Birth in support of Bliss .
In addition there’s more planned for 2022 with a brand new duo with drummer Fran Knowles.

Amy also appears on Kathryn Tickell & The Darkening’s first album. This exciting new ‘world music’ sextet brings ancient Northumberland into the 21st Century.
In addition to this, Amy works with electro-folk pioneers Monster Ceilidh Band. Furthermore she performs with renowned Scottish Traditional Music Award winners The Shee.
Both bands have regularly appeared on national TV and radio in the UK. Moreover they enjoy sustained success on the UK and European folk and festival scenes.
Amy continues to live and work in Newcastle. Most importantly she continues to build her career as a professional world travelling musician after graduating from the course.
For further information please do get in touch

Praise for The Shee

“The Shee have already made a considerable mark on the folk landscape, but this excellent album takes them to another level.” ★★★★★
fROOTS
“A sophisticated, unexpectedly emotional set.” ★★★★
The Guardian
“Continuum is a stunning piece of work on every level, finely expressing a mix of musical mood and character to create something individual and distinctive”
Folkworlds
“a thoughtful and emotional collection of songs and instrumentals, showing off the exquisite musicianship and intuitive interplay gained from their 10-year collaboration”
FATEA

Praise for Kathryn Tickell & The Side

for gig bookings, lessons or anything else

We use cookies on our website to give you the most relevant experience by remembering your preferences and repeat visits. By clicking “Accept All”, you consent to the use of ALL the cookies. However, you may visit "Cookie Settings" to provide a controlled consent.
Cookie SettingsAccept All
Manage consent

This website uses cookies to improve your experience while you navigate through the website. Out of these, the cookies that are categorized as necessary are stored on your browser as they are essential for the working of basic functionalities of the website. We also use third-party cookies that help us analyze and understand how you use this website. These cookies will be stored in your browser only with your consent. You also have the option to opt-out of these cookies. But opting out of some of these cookies may affect your browsing experience.
Necessary Always Enabled
Necessary cookies are absolutely essential for the website to function properly. These cookies ensure basic functionalities and security features of the website, anonymously.
Functional
Functional cookies help to perform certain functionalities like sharing the content of the website on social media platforms, collect feedbacks, and other third-party features.
Performance
Performance cookies are used to understand and analyze the key performance indexes of the website which helps in delivering a better user experience for the visitors.
Analytics
Analytical cookies are used to understand how visitors interact with the website. These cookies help provide information on metrics the number of visitors, bounce rate, traffic source, etc.
Advertisement
Advertisement cookies are used to provide visitors with relevant ads and marketing campaigns. These cookies track visitors across websites and collect information to provide customized ads.
Others
Other uncategorized cookies are those that are being analyzed and have not been classified into a category as yet.
SAVE & ACCEPT